One of Seedboost’s most recent successes has been our work with hotly-tipped Scottish fintech startup WhisperClaims. Read on to find out how our user experience (UX) improvements helped WhisperClaims’ leadership team take their market-disrupting software to the next l" />
PREVIOUS Workpro Back NEXT Legado

One of Seedboost’s most recent successes has been our work with hotly-tipped Scottish fintech startup WhisperClaims. Read on to find out how our user experience (UX) improvements helped WhisperClaims’ leadership team take their market-disrupting software to the next level.

WhisperClaims is a fintech startup based in Edinburgh. Their founding team worked in R&D tax for many years, and had observed that lots of SMEs would get turned away by accountancy firms because their claims were too small to be processed economically.

They decided to do something about it, and so created a cloud-based software solution that would automate the process of preparing R&D tax claims. This proved a win-win for both parties in the equation – SMEs could access the services they needed, and accountancy firms could expand their services into a burgeoning SME market whilst making major time and cost savings for their existing clients.

When we approached WhisperClaims, they were looking into how to translate early market disruption into long-term growth.

Whilst WhisperClaims’ original product had already proved its potential as a major market disruptor thanks to its innovative functionality, we felt it was let down by an unpolished UX and user interface. Whilst the time savings the software offered accountants in its first iteration were – and still are – truly disruptive, the software needed a lift, design and interaction wise.

In a nutshell, WhisperClaims was operating with a functional, but not entirely standout, Minimum Viable Product (MVP). Whilst this had sufficed as WhisperClaims established themselves, to take things to the next level growth-wise they would need to review some of their key user journeys and rework their interface design.

I approached WhisperClaims after identifying how I could help them solve the issues above, and set up a meeting with their senior leadership team.

The team accepted my bid to help WhisperClaims rework their UX for their next major software launch. After agreeing on a small number of key milestones, we divided the project up into three broad phases, incorporating plenty of scope to check in with the client, receive feedback and make amends to our approach accordingly. These were:

After carrying out our initial audit, we felt that the software could benefit from a complete overhaul of their front end, including a number of improvements in key user journeys and navigation, as well as a revamped look and feel with regards to colour palettes, typography, illustration and imagery.

In a project that took just 25 days from start to finish, we created some major design improvements that were released as ‘WhisperClaims 2.0’ in September 2020. These included:

Below, you can see some shots of our designs. 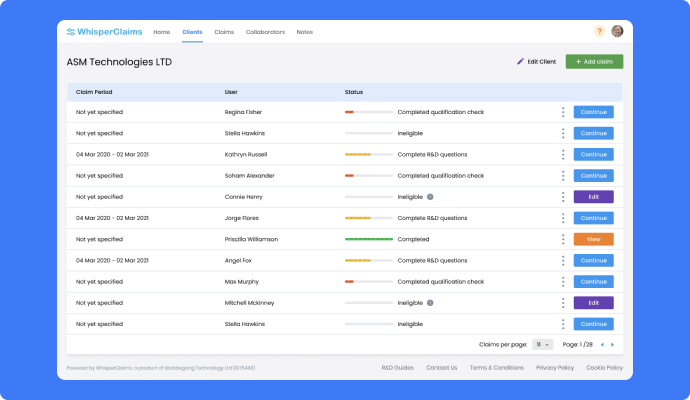 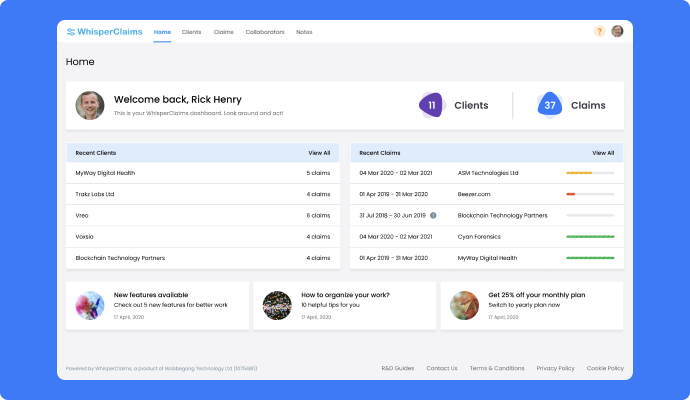 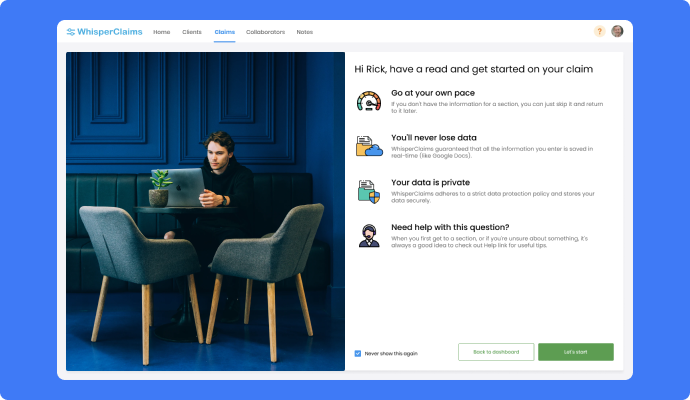 What Benefits Have WhisperClaims Seen Since?

The WhisperClaims team were thrilled with the outcome and execution of the project, which allowed them to revamp their software significantly, in a short space of time and with minimal disruption to their existing customers.

Richard Edwards, WhisperClaims’ CEO said “Ryan [Seedboost founder] produced a clean, attractive set of designs that resolved the UX/UI hotspots within our app”. Operations Director Jen Badger and the team we worked with day to day were similarly pleased with the results, stating that “everyone is very happy with the designs”.

In 2020, WhisperClaims has been going from strength to strength in spite of the difficulties associated with operating during a pandemic. Early feedback from their client base about WhisperClaims 2.0 has been encouraging, and the team are optimistic of longer-term success.  With previous UX pain points now resolved, the app can now help accountancy firms automate R&D processes more efficiently than ever before.